The SNP are desperate ...


... between Cameron and Salmond, but Cameron knows that if he put a toe into the referendum pond the SNP would probably get a swing to independence, as Cameron said, the referendum is between the Scots;  the currency and EU will sink Salmond, unless he gets Cameron on camera ..... poor fools!


Will we have the power to reduce VAT on repair and maintenance work to dwellings in an independent Scotland?


Independence will enable the Scottish Parliament to explore a reduction in VAT on repairs and maintenance work to homes as part of wider taxation priorities.
Powers over VAT, currently exercised by the Westminster Government, will transfer to the Scottish Parliament as a result of independence. The tax system in place immediately before independence will be inherited at that time. Thereafter decisions on the tax system and all specific taxes – including tax rates, allowances and credits for VAT and other taxes – will be made by the parliament and government of an independent Scotland.

The answer from Salmon and chums is Yes-No, we can but we cannot, we might but might not ...

The White Paper is a gift to the "Better Together" campaign, do they realise it ?


... who will say no, how can you argue against the lip smacking list ?

Nothing tangible about currency, just the old chestnut that it will be better for the continuing UK to remain Scotland's lender of the last resort, I'm not sure if middle Britain will be carried along with this argument. I think it best let Salmond and Sturgeon burble on whilst we get next years street party ready ......... Salmon has won the argument with the little people with little more than pocket money.

There is a soft belly in the Independence argument, the isles [Hebrides, Orkney and Shetland] would like to be devolved away from Edinburgh, will Westminster be able to counter Salmond with Scotland's Viking heritage, could the Secretary of State for Scotland counter Salmond with the Isles ?

There is one aspect of today's white paper that I find nauseating,  Sturgeon said today the SNP government of Scotland hadn't introduced an improved childcare because the British Treasury would have benefited through greater tax take, when I heard her words she confirmed my feelings that politics is rarely about what will benefit the little people, its about what benefits politics.

A threat by Alex Salmond yesterday that an independent Scotland could walk away from its multi-billion pound share of UK debt if Westminster refused to let it use sterling, has been rejected by one of  Britain’s leading economists.

The First Minister yesterday issued an ultimatum that a separate Scotland would refuse to accept its liabilities if London ruled out sharing the Bank of England and entering a sterling zone with Edinburgh. He insisted such a move would not be tantamount to defaulting on debt.

Salmond’s threat to walk away from national debt | The Times
http://www.thetimes.co.uk/tto/news/uk/scotland/article3771533.ece


I wonder how the electorate of the "continuing UK" would feel about Salmond's threat, might it be best to end the union with Scotland today ?
Posted by Unknown at 16:40 No comments:

Wiki gives a good toe in the water idea with :


Culture is a modern concept based on a term first used in classical antiquity by the Roman orator Cicero:

"cultura animi", cultivation of the soul.

My first reaction to the question was a text to the radio show, the last to be read, it said:


Culture is today, every part of our daily life it is the rise and fall of songs, literature and language, yesterday is history.

I seem to be at odds with current thoughts ....

Cicero, I believe, would have agreed with Hoebel who described culture as having two distinct parts, the physical artefacts, material culture, and everything else, those intangibles such as language and customs.  My guess is that Jason Mohammad, and all those that spoke on the show, consider culture to be restricted to those intangibles, and in Wales it seems that the minority language, that is under threat from extinction, is considered of greater importance than all else on the cultural agenda.

Architecture, including design, choice of material and spacial impact would be considered material culture, separated from the other side of the cultural coin, the intangibles.

This simple example demonstrates the weakness of the traditional description of culture, how do we separate the material from the intangible when language develops as a response to our material world, if the intangible is inextricably linked to our material world, then our current use of culture as a reference to support political ideas is fundamentally flawed because it is partial, it is incomplete.

Going back to Cicero, are we cultivating our soul by failing to embrace the material culture that is today's culture, do we need to consign much of culture to history and embrace today and tomorrow as our true culture.

In Wales "The Mabinogion" would become a curiosity of cultural literature, does "Dylan Thomas" affect our perception of culture in the 21st century, and finally as a point for further consideration, the 2013 "Cardiff International Poetry Competition", link here .....


First Prize, Geoff Lajbrok from Cambridge
for his poem The Goose in the Suitcase

Second Prize, Rosemary Shepperd  from London
for her poem My Milkman comes from Sarajevo and has beautiful hands

Third Prize, Valerie Laws  from Northumbria
for her poem Hitting the Road with Frida Kahlo

Comment No. 45. by  paul80  "Poorer parts of the UK should receive more funding. Makes sense. The UK is a sinlge country after all."

I don't think he is right, "why should a poor part of any country receive government funds because it is poorer than other areas ? "

Two questions, both linked, spring to mind, "who would receive the funding, and, who would decide how it would be used ? "

If, for example, it can be demonstrated that an area has such poor literacy that its inhabitants are unable to attract good, well paid, employment, then government might address educational needs of the area.

If, for example, health issues can be linked to poor sanitation, then government can intervene, much like London of the 19th century.

I don't think so, funding should be equal across the UK as a whole, based upon population, but a new approach to funding societies deficiencies wherever they are found. 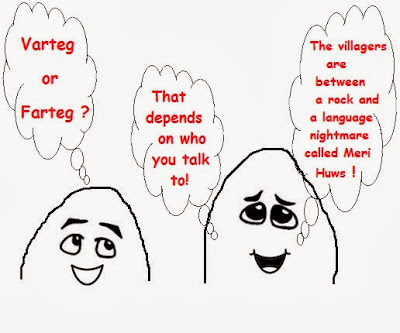 What point changing the "V" for "F", the answer is of course there is no "F" in the welsh language, but in Wales we have two languages, English and Welsh where above 80% of people speak only English.

The story was reported hereand here.

Myself, I think the village might change its name ....... to "Meri's Folly" or "Foggy Bottom", but seriously how a place is named should be the choice of the residents, and there should only be one name  !